Jeff Houser, a Registered Professional Forester, is a recent addition to RFFI’s forestry team. On April 16, Jeff signed on as a full-time Forester with the Usal Redwood Forest Company (URFC), which manages our 50,000-acre Usal Redwood Forest. Linwood Gill, URFC Chief Forester, welcomes Jeff, “It is a pleasure to have Jeff as part of our team at URFC. He brings over twenty years of desirable experience to our evolving staff and will play a key role in our forest operations and developing our in-house data management.”

Mr. Houser graduated from Humboldt State University with a degree in Forest Management in 1993. He spent the ten years until 1994 with the United States Forest Service fighting fires and marking trees. Jeff was a firefighter- one of the Lassen Hot Shots and was the supervisor of an inventory and tree marking crew. In 1994, he transitioned into the management of private forest lands. This work included the development of long-term sustained yield plans & timber harvest plans, as well as creation of forest management computer applications. He brings these and many other skills to his new position. 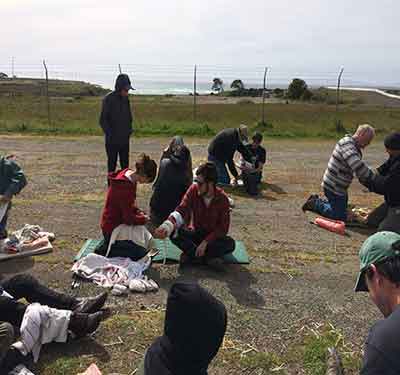 For example, Jeff’s familiarity with carbon sequestration projects should prove to be a valuable asset. RFFI’s award-winning Usal Forest Carbon Project is one of the largest forest-based carbon projects in the nation. Over the past eight years, he has focused on forest carbon projects that involved feasibility analysis, wrote project design documents, performed and supervised long-term growth & yield modeling, quantified carbon stocks and statistics, and developed relational databases for long-term data managing, updating, and reporting.

Jeff and his wife Cynthia have two children and four grandchildren. RFFI and the Usal Redwood Forest Company are extremely pleased to welcome Jeff to our enthusiastic and dedicated forestry team.