‘For over two years, RFFI has been working with students from Anchor Academy. In past events, Anchor Academy students have helped us remove invasive species choking redwood seedlings planted by RFFI both in Otis Johnson Park, Fort Bragg, and Selkie Cove, Albion.

This year, we returned to Otis Johnson Park to tackle our most ambitious project yet. Near the Cedar Street entrance to the park, a patch of blackwood acacia had vigorously taken root. While beautiful, when unchecked this Australian species can quickly take over an area and choke out native conifers. To reclaim this part of the forest, we set about clearing an area and preparing to plant. Before the students arrived, Chief Forester Linwood Gill cleared much of the acacia stand. 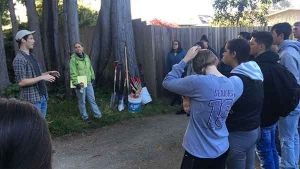 Once our strong-backed labor force showed up, we got to work piling up the felled trees for removal. Other students set about removing ivy from nearby seedlings, while a third team used handsaws to remove more acacia trees. Amazing as it is, the slideshow image shows just a fraction of the vegetation we removed. The City of Fort Bragg, an active partner in the project, took the vegetation off-site for composting.

With the site prepared, Forest Conservation Specialist Karen Youngblood showed the students how to plant native species of conifer and fern, generously supplied by the Jughandle Native Plant Nursery.

Students had a great time putting native species in the ground. With upkeep and a bit of luck, these seedlings will take root and one-day comprise the backbone of a thriving and healthy ecosystem.

At the May 13, Tim Anderson (who, along with Katrina Tichinin, runs Anchor Academy), RFFI Program Director Elias Henderson, and President Mark Welther were on hand at the Fort Bragg City Council meeting to accept a formal volunteer award from the City.