Summary: The work of the Redwood Forest Foundation (RFFI), is featured along with other climate change practitioners in the DiCaprio documentary about climate change that debuts at the Cannes Film Festival on May 22. 2019 and on HBO on June 11, 2019. Linwood Gill, RFFI Chief Forester, and Raymond Baltar, RFFI Biochar Project Director, appear and are interviewed in the film. 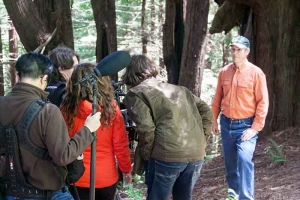 Dateline and Lead: Mendocino, CA; May 18, 2019. Redwood Forest Foundation Is featured in the upcoming ICE ON FIRE DiCaprio documentary on climate change debuting at the Cannes Film Festival and premiering exclusively on HBO. DiCaprio describes ICE ON FIRE as exploring new frontiers in stopping climate disruption.

The work of the Redwood Forest Foundation (RFFI) is featured along with other climate change practitioners in the DiCaprio documentary about climate change, an eye-opening film that focuses on many unheralded solutions designed to mitigate our intensifying environmental crisis. It transcends the current climate change conflict and offers hope that we can actually stave off the worst effects of global warming, if we act quickly and intelligently.

The documentary will have its World Premiere as an official selection of the 2019 Cannes Film Festival on May 22, 2019. It debuts exclusively on HBO on June 11, 2019 at 8:00PM and will also be available on HBO On Demand, HBONOW, HBO GO and partners’ streaming platforms.

With stunning cinematography of a world worth saving, ICE ON FIRE was filmed across the globe, from Norway to Alaska, Iceland to Colorado, Switzerland to Costa Rica, and California to Connecticut. It features firsthand accounts from people at the forefront of the climate crisis, with insights from scientists, foresters, farmers, innovators and others. 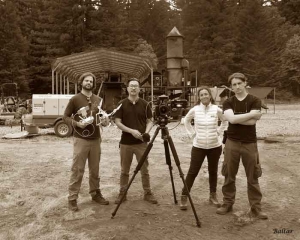 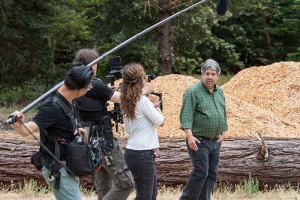 The film visits places such as the Usal Redwood Forest in northern California, interviews RFFI Chief Forester, Linwood Gill, highlighting the Redwood Forest Foundation carbon-storage project and RFFI’s reforestation and sustainable forest management practices. Film Director, Leila Conners, also interviews Raymond Baltar the manager of RFFI’s North Coast Biochar operation. Biochar is a carbon-rich soil amendment converted from competing excess brush and trees that were removed to restore forest health and prevent forest fires. The removed waste is converted to biochar. When placed in the soil, this charcoal like amendment reduces water and fertilizer use and improves plant growth, while storing carbon in the soil for hundreds-sometimes thousands of years. ICE ON FIRE visits Ron Finley’s urban farm in Los Angeles, where members of the community grow food that takes carbon out of the air and is nutritious; Climeworks’ nimble direct air capture machine in Zurich; and Thimble Island Ocean Farm off the coast of Connecticut, where owner Bren Smith grows shellfish and seaweed that soak up more carbon than land-based plants; and it can be used for food, animal feed and fertilizer. 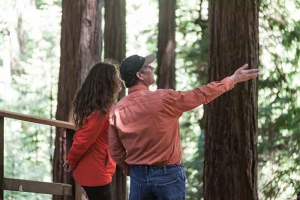 ICE ON FIRE graphically portrays the risks and documents the urgency that may be higher than ever today. On the other hand, the intrepid film maker, Leila Conners, has traveled the world unearthing innovative solutions, and sharing the innovative work of dauntless pioneers. She offers a realistic but hopeful perspective on a key global issue that demands immediate action. Leila Conners is the Director and returns to Cannes where her first acclaimed climate film “The Eleventh Hour” debuted at the Cannes Film Festival in 2007. She has now done more than document the crisis, she has identified solutions and is actively mobilizing resources to put them into action.

The Redwood Forest Foundation (RFFI), is headquartered in Mendocino county with offices in the San Francisco bay area. RFFI is a non-profit that acquires and restores depleted forestlands for the purpose of establishing sustainable working community forests for the economic and environmental benefit of the community, regional and global. RFFI owns and is conserving and sustainably managing the Usal Redwood Forest, one of the largest non-profit owned ‘working community forests’ in America. Usal is a forest landscape that covers a land area almost twice the size of the city of San Francisco. RFFI manages the Usal Redwood Forest Carbon Project, one of the largest forest carbon projects in the nation. RFFI actively engages the public in the management of their natural resources, provides environmental education, and is the leader of an innovative North Coast Biochar Project.

Photos available in our Newsroom at: https://www.rffi.org/newsroom

For more information about the film: http://www.thefutoncritic.com/news/2019/05/16/ice-on-fire-revealing-new-solutions-to-the-climate-change-crisis-debuts-june-11-exclusively-on-hbo-leonardo-dicaprio-produces-and-narrates-844015/20190516hbo02/#AgkhV0TCGBp1vJt6.99